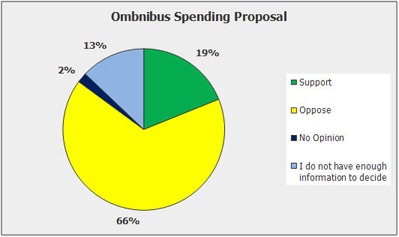 More than 1,000 members responded to the recent legislative survey and many of you voiced strong opinions about recent government actions and issues currently under debate in Congress.

In general, do you support or oppose the federal government’s passage of the nearly $1 trillion economic stimulus plan?

Do you support or oppose the proposed continuation and expansion of the Troubled Asset Relief Program (T.A.R.P.), also referred to as the “bank bailout”?

Do you support or oppose health care reform that would implement Universal Health Care (also referred to as “government run health care” or “the public option”)?

Do you support or oppose private market solutions with limited regulation as an alternative path for health care reform?

Would you like to become a member of the Alliance Action Team and stay informed regarding legislative issues that impact you, your family, and your business?

If you answered “yes” to joining the Action Team, please indicate if you would be willing to participate in any of the following activities.

Results are based on findings procured in a June 2009 Survey of the Alliance for Affordable Services Membership. The survey was sent to all active members with an email address on file. At the time this data was obtained, there were 1,056 total responses.